Australia is the most important tourist countries in the world, due to the nature picturesque but they contain a great coral reef, which is one of the largest coral reefs in the world, in addition to the enjoyment of beaches and bays and valleys of great beauty, also features Australia climate of moderation throughout the year, which makes it a tourist attraction State , and it is characterized by its cities with lots of tourist areas and the magnificent architectural buildings that recall the best in this article perhaps be a reference for you when you travel. 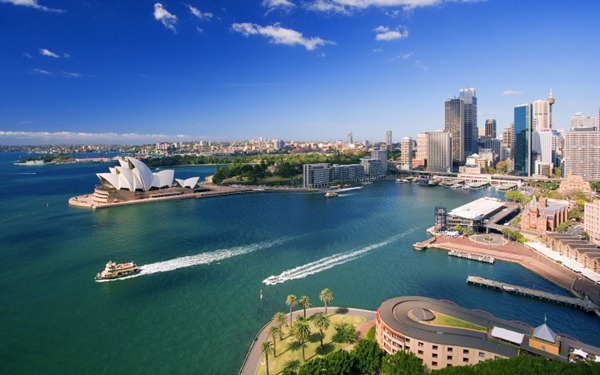 1. Sydney Sydney: is the largest city in Australia, founded by Arthur Phillip in 1788, a cultural, economic and commercial center in Australia and is considered the most important cities, with a population of about 4.57 million people, it is one of the best tourist cities in the world where you got the best city title tourist two consecutive years, where it enjoys a wonderful climate, you do not find only in this charming city, known for Sydney several landmarks worth visiting the most important of the Opera House, which is characterized by architectural design attractive overlooking the Sydney Harbour It is noteworthy that this global edifice receives more than two million visitors a year come to watch the best plays concerts, one of the greatest landmarks also the Sydney Harbour Bridge, which he gets millions of visitors from all countries to visit, the city and includes many of the luxury and trendy hotels and designs architecture in the buildings varied between cretin and modernity, as well as to contain stunning natural scenery and National Parks and bays and rivers attract all of visit . Sydney climate, characterized by moderate and warm all year round.

2. Melbourne Melbourne: the second largest city in Australia and is the capital of the state of Victoria, dubbed in gardens or green city to the large number of parks and green spaces, has many attractions, the most important of the Royal Botanic Gardens, which includes a number of unique Australian plant, one of the largest city parks, It features tourist also the city of gold, which is characterized by authenticity, where all Matgda in this city on the old-fashioned in terms of architectural buildings and means of movement, and there are King Victoria market that find it all you want of gifts, clothes and food, in addition to the walkway attractive Bourke Street, which features a musicians who play all the time in addition to the walkway you find shops and malls to buy beautiful souvenirs.

3. Brisbane Brisbane: the largest city in the state of Queensland in terms of population, was founded in 1824, the city is characterized in style architectural upscale and streets clean and beautiful Mqahia and markets, and the most prominent landmarks Brisbane animals, which includes various types of rare zoo, in addition to the mind of places Cultural Utilising the Gallery of Modern Art and Exhibition Queensland Technical months, which includes the work of Australian and international artists attractions, the city and includes many of the coastal sandy islands which is characterized by calm and beauty of nature.

4. Port Douglas Port Douglas: is the arrival gate to the city of Daintree is one of the most important tourist cities in Australia, where it enjoys a natural treasures enormous such as rain forests and coral reefs which is characterized by diverse and distinct from fish and marine animal species, which is the largest coral reef in the world where it is It consists of 2800 coral countryside.

5. Hobart Hobart: the largest city in Tasmania commercial and administrative position, was founded in 1803, it is characterized by the port`s Hobart cruises to Antarctica, enjoying Hobart landscaped attract both visited, in addition to contain Hotels with architectural style interview with the highest quality in services to residents.

6. Cessnock Cessnock: one of the oldest areas in the world, of the total tourist areas with attractive and charming nature of where vineyards in the valley Hatther, and includes many high-end restaurants, parks and resorts, health and health and is famous for golf a global nature.

7. Airlie Beach Airlie Beach: The city is located on the Port-shot Harbor, and is characterized by its nature Barrier Reef great, one of the most important tourist attractions, the city and includes many of the clubs and casinos in addition to the artificial lake which is the teacher of the city and frequented by many tourists.

8. Byron Bay Byron Bay: Byron Bay is located in the state of New South Wales and is characterized by beaches filled Lighthouses also features dolphins, whales and sea turtles as well as to give the traditional character of the area, featuring the Gulf to establish a lot of events and famous festivals.

9. Canberra Canberra: is the capital of Australia, located between the cities of Sydney and Melbourne, this city by their nature are green surrounded them from all sides, and a lot of national gardens and a private Prendabila National Park which is one of the most beautiful national parks in Australia, and has many museums, art galleries, theaters, Featuring also design unique architectural and geometric shapes magnificent in construction, and the most important tourist places worth a visit in Canberra, the National Library and the National Gallery and Lake Burley Qrevi and Montenegro and Tower Telstra, as there are many markets and shopping malls worth visiting such as the Canberra Centre.

10. Darwin Darwin: located on the Timor Sea, the capital of the Northern Territory in Australia, characterized this city frequently sports out because of its geographical location privileged, where is famous for the sport of basketball, cricket, rugby practiced in Marara Sports Complex, and also famous in the race car, which is held in Hidden Valley, as well as it is famous for its marine sports and fishing, the city maintains a lot of the most important events and festivals Bear Cannes Regatta.